This article is from 2011. Opinions may have changed.

I dreamt of the blue skies. And in pursuit of another beautiful dream, I flew over the cotton-like clouds… my first flight. A warm evening in June. Haze covered the Delhi skies, as the flight descends to the land of promises. What was to follow, were days filled with awe, and silly incidents. 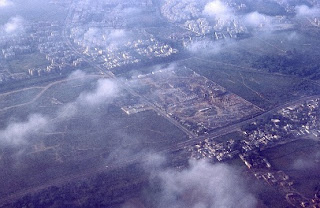 And then in an old Ambassador cab, I was on the way to Gurgaon. Gurgaon, the place where the desert was turned into a fertile land, for concrete monsters to grow and reach for the sky. Endless stretches of residential colonies, with high tension electric lines hung as garlands. Many a family, from different roots, must have found home in these blocks.

The next morning, there were seven of us, and we set out in a “share auto”. The way that little vehicle transports a truck-load of people, was insane yet comfortable. I doubt if I will see it anywhere else. Bargaining for a hired auto is a pain in the neck. “Kitna denge?” asked the auto-driver. Trying to play hard my friend said, “Pachaas!” The obviously unsatisfied driver blurted, “Pachaas mein nahi chalega. Kahaan se aaye ho?!” Innocently he replied, “Ghar se.”

The cars that roamed the streets were tattooed with dents. Back home, people attended to their cars, more often than they were worried of their own health. Any small scratch was a huge eyesore. Down the road, BMWs and Audis flooded the traffic junctions; while outside in the boiling heat we saw hungry young children. They were hanging on to their dear lives by selling some 5 rupees worth photos of Gods. Anyhow, we went on with our journey in the Metro, the lifeline of the NCR. Its clean, cold stainless steel frames, are definitely a relief in the madness that makes the city what it is. The historical monuments which dotted the Delhi landscape were a grim reminder how old this city really is. And that picture is different from the Delhi of malls, condos, and spendthrift lifestlye.

Of all the places I have been, an unforgettable memory was that of Chandni Chowk. However shabby and old the place looks, somewhere in its dark corners is where the real Delhi, the city of equality, still survives.